Creole wrasse – Clepticus parrae – are protogynous hermaphrodites; the largest fish in a group is a dominant breeding male, While smaller fish remain female. If the dominant male dies, the largest female changes sex.

Protogyny is the most common form of hermaphroditism in fish in nature. About 75% of the 500 known sequentially hermaphroditic fish species are protogynous.

Wrasses are always on the go during the day, but are the first to go to bed and the last to rise.

Flying Fish Fact:
Flying fish can reach the height of four feet in the air, and glide distance of 655 ft before returning to the water.

The Exocoetidae are a family of marine fish in the order Beloniformes class Actinopterygii, known colloquially as flying fish. About 64 species. While they cannot fly in the same way as a bird does, flying fish can make powerful, self-propelled leaps out of water where their long wing-like fins enable gliding for considerable distances above the water’s surface. This uncommon ability is a natural defense mechanism to evade predators. The ‘Exocet’ missile is named after them, as variants are launched from underwater, and take a low trajectory, skimming the surface, before striking their prey.

Etymology
The term Exocoetidae is both the scientific name and the general name in Latin for a flying fish. The suffix -idae, common for indicating a family, follows the root of the Latin word exocoetus, a transliteration of the Ancient Greek name ἐξώκοιτος. This means literally “sleeping outside”, from ἔξω “outside” and κοῖτος “bed”, “resting place”, verb root κει- “to lie down” (not “untruth”), so named as flying fish were believed to leave the water to sleep ashore, or due to flying fish flying and thus stranding themselves in boats. 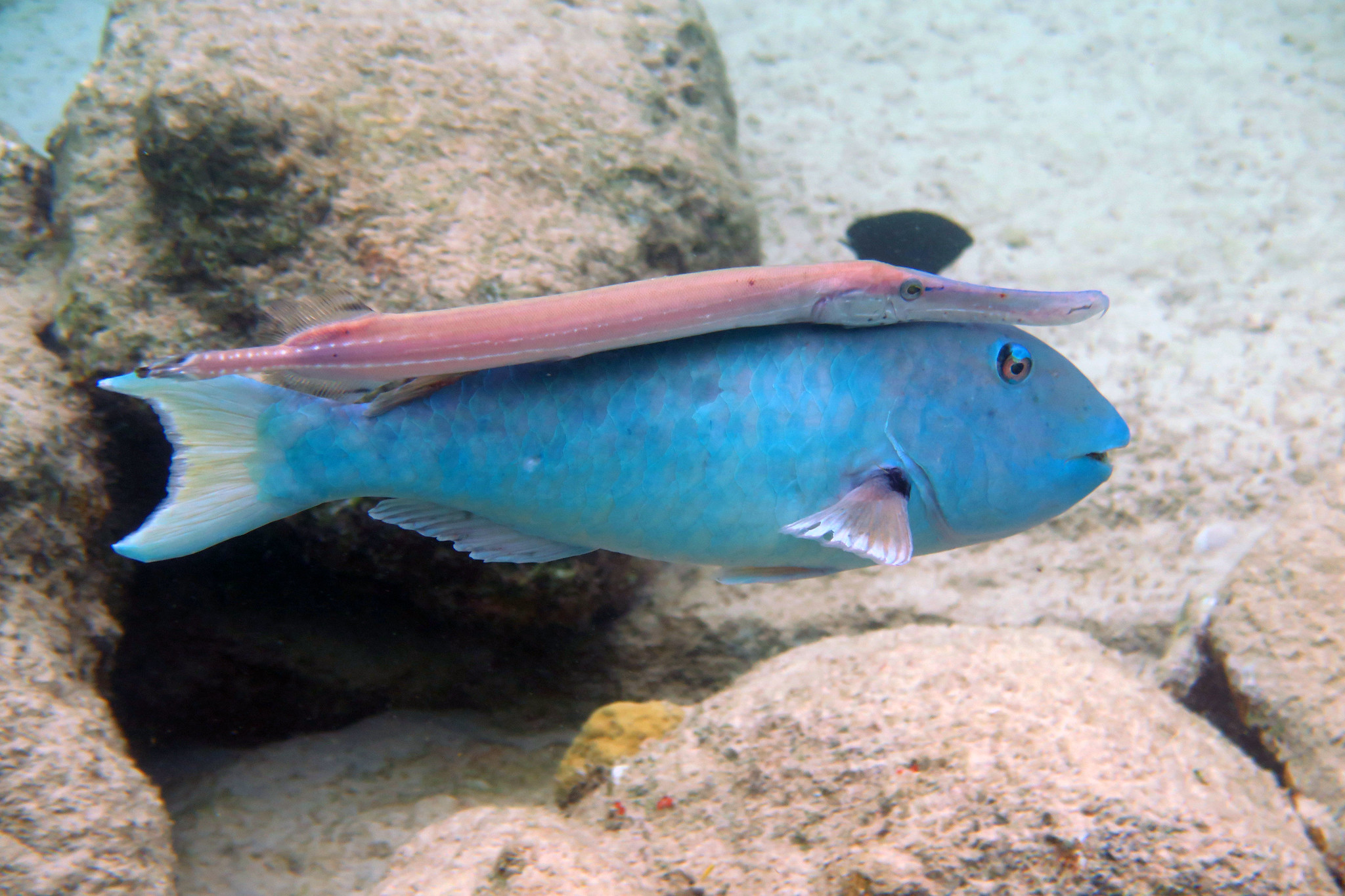 Shadow feeding
Using herbivores as a camouflage to sneak-up on its unsuspecting quarry, the Trumpetfish will lie along the back of the larger fish as they swim over the reef, darting out when close to its prey.

At night, butterflyfish settle into dark crevices, and their brilliant colors and markings fade to blend with the reef background.

Etymology
Chaetodontidae – The family name from Ancient Greek words χαιτέ, chaite ‘hair’ + οδοντος, odontos ‘tooth.’ This is an allusion to the rows of brush-like teeth found in their small, protrusible mouths.

Pink Skunk clownfish – Amphiprion Perideraion
The Pink Skunk is the only species of anemonefish to primarily feed on algae.

The magnificent sea anemone – Heteractis Magnifica – has two feeding methods. The first one is through the photosynthesis of its symbiotic zooxanthellae, living in its tissues, the second by capturing its prey with its tentacles that allow it to immobilize its prey (small invertebrates, fry or juvenile fish) See also https://marinebiology.org/2019/01/19/clarks/

Royal Mail Ship Rhone wrecked off the coast of Salt Island in the British Virgin Islands on 29 October 1867 in a hurricane. The rusting hull of a shipwreck provides provides the perfect platform for the development of a living reef . Almost immediately a ship comes to rest on the seabed an ecosystem will start to establish itself. Fish are usually the first to arrive at a new wreck, but are quickly followed by scores of other creatures. This ecosystem will eventually become varied and prolific, with an astounding number of different species often inhabiting a very small area. Many species need a foothold or place to hide in the fish-eat-fish world beneath the sea, and ships by their very nature contain a myriad of nooks and crannies that provide perfect homes for many of these critters. The wreck acts as a reef that will provide shelter for numerous species of fish and crustaceans, and the fact that they are usually raised from the sea bed makes ideal habitats for sea anemones, coral and fan worms, which feed by filtering the sea water as it flows by.

The stern section of the dive doesn’t offer too much in the way of penetration possibilities but probably has the most beautiful swim through of all wreck. Here is the stern of the ship with its propeller and rudder. The swim through also provides a protected area for the Hardhead silverside sardines – Atherinomorus stipes and Glassy sweeper – Pempheris schomburgkii to gather in great numbers.

Clark’s Anemonefish – Amphiprion Clarkii
In a group of clownfish, there is a strict dominance hierarchy. The largest and most aggressive fish is female and is found at the top. Only two clownfish, a male and a female, in a group reproduce through external fertilization. Clownfish are sequential hermaphrodites, meaning that they develop into males first, and when they mature, they become females. They are not aggressive.

Magnificent Sea Anemone – Heteractis Magnifica
Venom present in sea anemone (Heteractis magnifica) induces apoptosis in non-small-cell lung cancer A549 cells through activation of mitochondria-mediated pathway. The longevity of in the wild is unknown, but estimated that some of these anemones are hundreds of years old. The Clarks Anemonefish lifespan is only 14 years. The reproduction of the anemone can be sexual by simultaneous transmission of male and female gametes in the water or asexual by scissiparity,which means that the anemone divides itself into two individuals, separating from the foot or the mouth. That makes me say “Hmmm, very impresive.

Juvenile Warty Frogfish or Clown Frogfish – Antennarius maculatus
You can tell a Warty Frogfish from the painted frog fish by the skin being very warty (not so much as still juvenile) and a large triangle patch starting at the eye. The warty frogfish exhibits biofluorescence, that is, when illuminated by blue or ultraviolet light, it re-emits it as red, and appears differently than under white light illumination. Biofluorescence may assist intraspecific communication and camouflage.

Shortpouch pygmy pipehorse – Acentronura tentaculata
Like a combination of seahorse and pipe fish: their tail is prehensile and used for anchorage, winding itself around pieces of algae or seagrass. However, the front part of the body is typical pipefish, with the head and body held in line rather than bent through and angle like seahorses. There is sexual dimorphism and the males are somewhat larger and more robustly built than the females. Because they are so small, the brood pouch is also large in proportion to the body, giving the males a somewhat more seahorse-like appearance than the females which have the typical slim linear form of pipefishes.

Skeleton Shrimp – Caprellidae family – amphipods. Females carry large number of transparent eggs inside the brood pouch (located on her abdomen) until they hatch.

Slender Filefish – Monacanthus tuckeri
This filefish is a master of adaptive camouflage, it changes appearance in less than four seconds. Three-dimensional dermal flaps complement the melanophore skin patterns by enhancing the complexity of the fish’s physical skin texture to disguise its actual body shape. Found over sandy and rocky bottoms. Usually they live solitary or in pairs between gorgonians, sponges or near coral growths. Often they stay vertically in the water. Especially between gorgonians they are difficult to spot in this position. Feeds on algae and invertebrates. Due to the extremely small size of the slender filefish, they do not lie on the seabed as bigger fish do, but use their mouth to grasp the soft corals which prevents them from drifting with the sea currents.